What is Wolf ranks?

What do you think of Wolfranks?

What is Wolf ranks?

I made wolfranks to make som fun.
Wolfranks is a place you can talk with others and find new friends, and you can go from pup to Alpha :)

Alpha (1-2) - Usually there are two within a pack, although sometimes there is only one. However there can only be one of each gender holding this position. They are normally the active mating pair. They are dominant over all the rest of the pack and what they say should be considered law within their pack. They take an interest in what goes on in their pack and if they've been away for any length of time look to the Beta to learn of what goes on in the pack. (Leaders)

Beta (1-2) - There may be one or two in a pack, one of each gender. They may or may not be mates and are second in command. When neither alpha are around they take charge as it is the responsibility that falls to them. The Beta is there in order to test the Alpha in skirmishes which are never truly serious and results in little to no damage of either creature. Although there may come a time when the challange is serious. (Second in Command)

Gamma (1-2) - Those holding this position are usually if not always the oldest and wisest of the pack. Through their stories and their phrases they pass on to the others within the pack their wisdoms. They delight in telling stories to pups though sometimes what they tell is just legend, but still each story usually has some sort of moral to it. At one time they may have been the Alpha and usually that is true. However the current Alphas may put others here should it seem right to them. There is usually only one or two who fill this position and normally only one of each gender, especially if they were a prior Alpha pair. Those who hold this position are much respected and loved by the rest of the pack. (Elders)

Delta (1-4) - They are the messangers of the pack, the go between among the allies and sometimes even the axis. They risk their own lives by doing so, but it is their duty and must make sure that those who need to know are told. Sometimes they work in conjunction with the Upsilon. Those who seek this position must be agile, patient and have an even temperment while speaking with other packs. (Messangers)

Epsilon (1-2) - They are the Gaurdians of the pack. Their job is to ward off intruders and are responsible for the safety and wellbeing of the pack. They should have at one time been either an Zeta, Eta or Iota for they will need the skills of peace and fighting. Though they should only resort to violence should peaceful persuasion fail. (Gaurdian)s

Zeta (1-3) - The war general of the pack. They take direct orders from the Alpha in case of a war. The Alpha may be the one to declare war, but the Zeta leads the army and plan the plans for war. They also train new recruits for position as a Eta and Eta or more to take his or her place in future. Normally there is only a single Zeta, but if the populace is high there can be as many as three. (War General)

- There are at least two in a pack. The Eta are the warriors of the pack. They are led by the Zeta or the Epsilon during skirmishes and wars. Although they will take orders from the Alpha or other higher ranks if given, but the Alpha's above all. (Warriors)

Theta (1) - They are the lead medics within the pack, therefore it is they that the Iota aspire to be. (Lead Medic)

Iota (1-2) - They are the medics of the pack, knowledgable in herbology. They have vast knowledge upon what plants and other natural resources will help cure and heal others. (Medics)

Kappa (1-2) - They are the lead hunters in the pack. Normall there is only one, though sometimes there are two depending upon how large the pack is. They lead the packs hunts when the Alpha or the Beta when substituting tell them to. They make sure that the entire pack is well fed and will not starve. They oversee as well, that the pack will have a well balanced diet. (Lead Hunters)

Lambda (Unlimited) - They are the hunters of the pack. They follow the Alpha or the Iota in the hunts. Those who hold this position are loyal and quick to follow orders. They have stealth and agility on their side and together are able to take down larger prey. (Hunters)

Mu (1) - They are the peace keeper of the pack, using mediation between those who're angry with one another. The Alpha may take them with them to speak with another pack over starting a treaty. They make sure that no serious fights break out within their own pack. They may at times also work with the Delta, Zeta or Upsilon. (Peace Keeper)

Nu (1-6) - They are the sentries of the pack. Their duty is to keep track of natural resources, finding dens and areas of abundant food for the pack. They also must keep watch of the pack making sure to call the Epsilon, Delta, Lambda or Upsilon. (Sentries)

Xi (1-2) - Their main duty is to keep an eye on their resources such as water supplies and potential den areas. They may at times even assist the hunters. Should an unwelcome visitor infiltrate the packs territory they are able to call upon the Gaurdians/Epsilon. (Resource Watchers)

Omicron (1) - The Omicron is usually the lead Pi and oversee to it that each one is taking care of the rest of the packs problems in a way that wont harm anyone. They are those who with permission from the Alpha may choose who will become a Pi. (Top Therapist)

Pi (1-4) - The Pi are therapists within the pack. Often the other members will come to them to confide in, because it is the duty of the Pi to keep such confidences confidential and try and help those who come to them by giving them advice and advising them on what might be best for them. Although they are not always right, but should be able to help out and be a good listener. It is also advised that they themselves do not make judgements of others. (Therapists)

Rho (1-2) - The Rho are secretaries to the Pi, making sure that they have breaks in between appointments. They also are the ones that those seeking the therapist must come to in order to make an appointment so things do not become to chaotic if everyone wishes to speak with the Pi. (Secretaries)

Sigma (1-2) - The Sigma are the Tutors of the pack. They know much about each thing. They often work with the Phi in order to teach the pups as well as the subordinates and others who might need a bit more knowledge within the pack. (Tutors)

Tau (1) - The Tau is the lead Scout/Upsilon. They give orders to the Upsilon on whom to spy upon or what packs to look at. They are also known as the best of the Upsilon and only those who've proven themselves may be promoted from Upsilon to this position. However their direct orders come from the Alphas. (Lead Scout)

Upsilon (1-4) - The Upsilon are the scouts or spies of the pack. They go into other pack territories in order to find out what's going on. Afterwards they report back to the Alpha and tell them about all that they have seen, even should it just be that pups have been born. They will also report to the Zeta if they were asked to find wolves of their own for battle, or they report to the Alpha pair. (Scouts/Spies).

Phi (1) - They are the pup sitters of the pack and delight in teaching the young that which they will need in the future. However if a pup gets lost or hurt they are hold accountable should the pup have been under their care at that time. (Pup-sitter)

Chi (1) - They are the jester of the pack. They help to make others laugh when things get stressful. (Jester)

Psi (Unlimited) - These are the subordinates of the pack. Usually new memebers or yearling wolves start here and must prove themselves before they are given a better ranking. However they need to be careful and achieve a higher ranking least they become the Omega. (Subordinate)

Omega (1) - They are the scape goats of a pack. Often they are picked on by the other wolves and are last to eat. Sometimes things may become so bad that they might even up and leave the pack, though there are those who remain to stick it out. (Lowest Rank)

Pup - They are the young usually born into the pack under the age of one. Depending upon morality and the attitude of a pack as well as the food that is aviable the number of pups in any pack may vary.

Every ones that is new here starts as a pup. 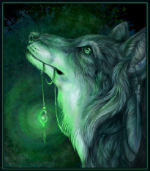 Well, I think the ranks is good c:
Sponsored content